An Ode to Tea 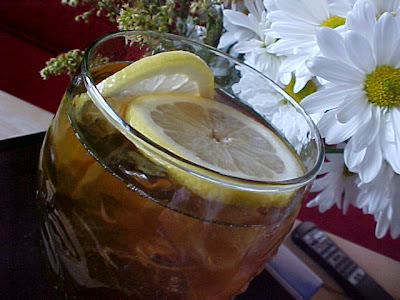 How did I live before I knew you?

How did I get through two pregnancies without you?

Where have you been all my life?

Well, come to the North.

...there are two mountains of laundry waiting to be folded and put away...
...the vacuum is calling me names...
...my windows are finger printy...
...I can see a layer of dust on the bookshelf...

...yet here I sit, sipping my {decaf} sweet tea with lemon, waiting for the motivation to get moving.

I think seeing that little list up there is motivation enough. Although, one more little glass could give me some energy. hmm....
Posted by Brambleberry at 9:39 AM No comments:

For whatever reason, pregnancy always brings my subconscious back to the days of high school. Many of my dreams involve people and places from back home. Most all of them occur in my grandfather's old store. At any rate, the things I have long forgotten somehow are brought back into the forefront of my mind to be replayed, rehashed, rehumiliated, etc.

This morning I was reminded of the first time I decided to try roller blading. All of my sister's are athletically gifted. I am not. Not even a little. They all had roller blades. I had a bike. (They had bikes, too.) In a moment of sheer genius, I thought that my first attempt at rollerblading might be easier if I used my bike to steady myself. Not entirely sure how to combine the two, I decided it would be best to just jump on in and give it a try. Why waste time mulling it over?

So I got on the bike and pedalled with the roller blades. Not quite what I had planned, but it worked. I kept going. It was then that I noticed our naughty and bull-headed cocker spaniel had followed me. Great. I tried to tell him to go home. He acted like he didn't know me. By this time, I had ridden several blocks, and was at the stop light on the corner of town. I had run out of side walk and was stopped at the light, waiting. This particular stop light was the intersection of two highways. Thoughtful engineers had designed the road to slope at all edges to allow for prompt and proper water runoff. Which is fantastic if you are a road. But it really sucks if you are a girl on a bike with roller blades and a cocker spaniel.

When the light turned, I tried to go. But you can't "push off" when you have wheels on your feet. And it is nearly impossible to pedal forward, up a slope, from a dead stop. There I was. The fool. Trying frantically to move. My dog halting all traffic by sniffing around in the center of the semaphore. My handlebars jerked around in a 180, causing my bike to fold in half all around me. Cars that had politely been waiting for me to get out of their way were now inching forward, trying to get through the light.....

Once I figured how to contort my foot so that I could push off and get myself going, I went. And kept on going. Mentally mapping out the quickest and most secluded path home. I almost prayed that someone would run over that stupid spaniel.
Posted by Brambleberry at 12:21 PM 4 comments:

...but my brain has frozen, and I have nothing interesting to say.

Happy Wednesday.
Posted by Brambleberry at 8:49 AM 3 comments: The breeze flows through open windows and makes the curtains dance

Flowers are beginning to push their way out of the soil

I am filled with a new sense of hope and joy

I'm praising God for this wonderful season
Posted by Brambleberry at 2:22 PM 2 comments:

I'm getting a new sink. And faucet. I can't wait! Only, what was originally slated to take my super husband 2 hours, has become a two day affair. He's handling things pretty well. I've heard a few grumbles here and there.

He was sold some wrong parts that have the wrong threading to connect to some kind of dealy-ma-bob. He discovered that during a conversation with a wonderful hardware store owner this morning on his third attempt at keeping it local. Unfortunately, none of the hardware stores here have the right whatchamacallits, so he had to make a run to the next town over. To a big box store. Where he finally got all the right pieces to the puzzle. So in a few short hours, or a few more days, I'll have a shiny new sink and faucet. Hopefully. And my husband will be able to gaze at his Man of the Year trophy. Which is me. His trophy wife. Of course. *cough cough*

Editing to say that the new sink is in!

Here is the before: 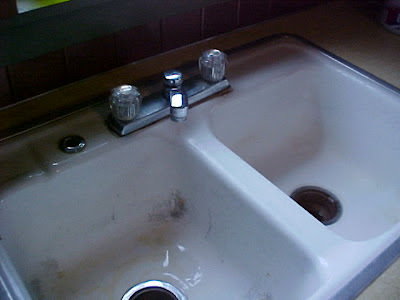 (See how the old one had scuff marks? They would not come off. I tried everything. It looks horrible, I know. And the old fauctet? Same deal. They just never looked "clean" to me. Even though they were both bleached and scrubbed every day. --I have some issues. I'm almost embarrassed to put this old photo up, since it looks so bad. But, the bad one only makes the new one that much more wonderfulicious.) 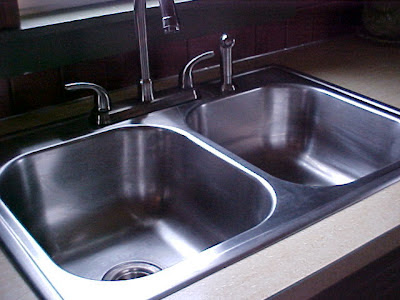 We paid for them with his Daddy's money. I wish he would just stay little....a little longer.
Posted by Brambleberry at 2:46 PM 4 comments:

Cocoa butter prevents stretchmarks. Every pregnant lady MUST have this staple in her beauty arsenal.

When I was pregnant with my first, I dutifully and liberally applied this wonder lotion EVERY DAY. Things went really well. For the first 7 months. And then they came.

One fine morning I awoke to a round tummy that really closely resembled a water melon. Stretch marks appeared over night. What a rip off! I believed the lies! Those lying liers. Cocoa butter does NOT prevent stretch marks. At least not if you are genetically predisposed to them. And if you are not predisposed to them, I don't want to know it. And I hate you.

And then with my second baby, I thought....well, perhaps a little more cocoa butter wouldn't hurt. You know? Maybe this time will be different. I've already got a water melon tummy, maybe this cocoa butter will save me from becoming more water melony. So I did it all over again. Same story. But baby number two grew larger, and was cooked 3 weeks longer than baby number one. And I ate a whole lot more mozzarella cheese sticks from Arby's with baby number two. So the cocoa butter did nothing for me. And just when you think there isn't room for any more stretch marks, somehow, the impossible is made possible. More appear. Great. Fabulous. COCOA BUTTER DOES NOT PREVENT STRETCH MARKS.

So here we are. Baby number three. Knowing what I know, you would think I wouldn't bother. Right? Wrong. I am bothering. Perhaps I have it all wrong....perhaps I am supposed to be EATING the cocoa butter?
Posted by Brambleberry at 9:18 PM 7 comments:

I feel so boring. All I've been posting about is food. Which, honestly, is mostly what I'm thinking about these days. Besides my kids and my husband. Of course. Because I'm not entirely self-centered. Really.

The projects have been slowed. I took on a fix-it job for a friend. A weighted blanket. Several key lengths of thread had been pulled out of the blankie, and all the weights went to the sides.

(The blanket had been a life saver for them. Their great little guy has mild-ASD, and slept so poorly until someone suggested they try the magic blanket. Like a charm, he would go to sleep right away, and sleep through the night. The blanket provides a soothing, all over pressure, to calm his senses. I've thought about making one for myself....just working with it, I can just imagine how wonderful the gentle pressure must feel.)

When the Mama was telling me about it, said they were trying to find a seamstress willing to fix it, I said I would love to do it for them. Adjusting the weights, and pinning the seams back together went fairly quickly. The sewing has been very s l o w going. There are 25 columns, and it has taken me 4 hours and 2 sewing needles to stitch 8 of the columns. Who knew it would take so long to sew a strait line? I am trying to sew a few columns every day. I wanted so badly to quickly whip it back in shape so they could begin using it again right away.

Ah, well. Soon enough. Slowly but surely wins the race. A penny saved is a penny earned. In a tornado, even a turkey can fly.
Posted by Brambleberry at 10:11 AM 2 comments: 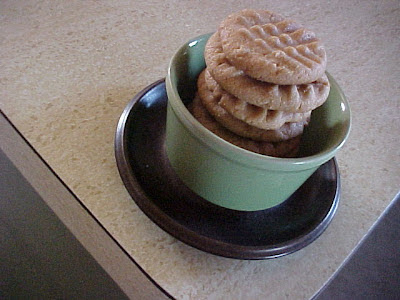 My cupboards are running a bit bare, but I refuse to go to the store. The last time I went grocery shopping, I came home with ring bologna -- because the meat section made me want to throw up. What was I thinking?! RING BOLOGNA. What do you make with that? I digress. I'm waiting for a nice stomach-settled evening to restock...so no other unusual items find their way into my home.

So back to the cookies. We were playing a game called Cookin' Cookies, and I just got hungrier and hungrier for cookies. Any kind of cookies. Then I remembered this awesome recipe for peanut butter cookies I had gotten a few summers ago from a friend. (Hi, Kathy!) It requires just 3 ingredients...all nearly always in my cupboards.

My son helped form little balls and then press them with a fork. Some were squished REALLY well.

Mix together. Roll into balls. Press with a fork. Bake at 350 for 7 minutes. Cool. Eat. Several.

(Best dipped into a glass of milk.)

((I like to chase them down with lasagna.))
Posted by Brambleberry at 2:43 PM 4 comments:

you say sneaker, I say snicker 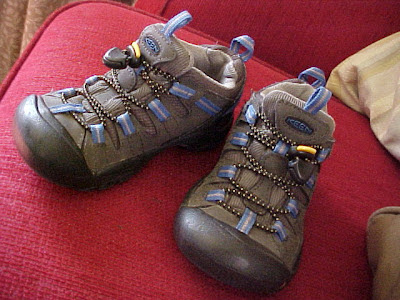 "I can put on my new snickers all by myself."
"See how fast I can run in my snicks?"
(This is one of those misspeaks that is hard to {want to} correct.)
Posted by Brambleberry at 12:46 PM No comments: