My sister is getting a new table and chairs. She had been using this set. She's done with it now, so she sent it my way. And I love it. LOVE IT SO MUCH. 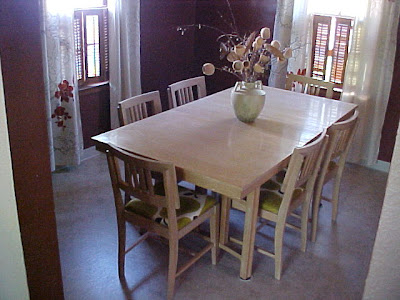 Look at these chairs! I'm loving them. 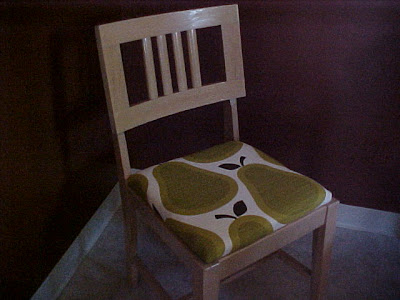 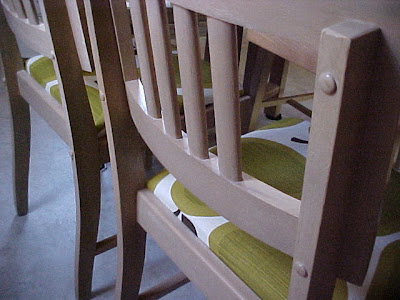 And this table!? That there's a curve. 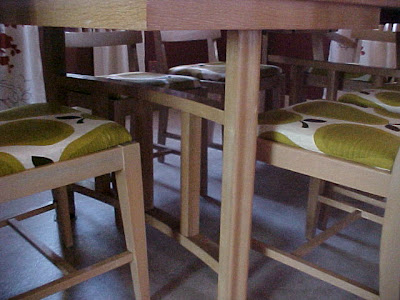 Um, so if you are getting something new, and need a place for your something old to go, you can totally send it my way.
Posted by Brambleberry at 11:13 AM 5 comments:

Georgia with a peanut

[Almost] every day, when my baby is down for the first nap of the morning my boy says,
"Hey, mom. What should we do to pass the time? I know! Let's do the state puzzle."

Sometimes he'll say, "Hey, mom. I'm feeling a little sleepy. What would wake me up? I know! Let's do the state puzzle."

So we do. And, let me tell you, this boy knows his states. It's amazing. 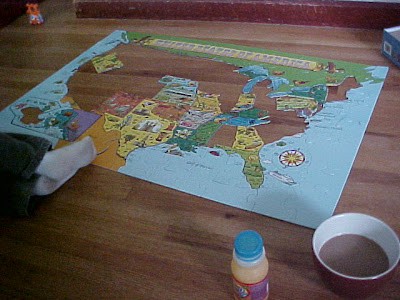 Mississippi, Alabama and Georgia-with-a-peanut are three brothers, according to him. Mississippi and Alabama got in a fight. Over toys. So they are both looking in opposite ways saying, "Hhmmph." 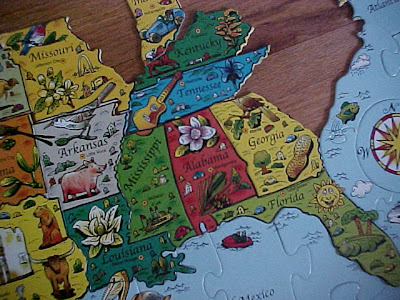 He can place all the states by himself...and has made up a story about almost all of them.
This puzzle has been one of my best purchases.
Posted by Brambleberry at 8:52 AM 1 comment:

You know, when your husband tells you to drop off the big kids once he's off contract time...to bring along a Charlie and Lola for them to watch while he gets all his {school} year end work in order.....so that you can catch a little nap while the baby sleeps....and you drop them off, and on the drive home you get butterflies of excitement flitting around your stomach. What will you do? What will you do?! A couple of free hours! And you are so excited by this prospect that you can't fall asleep. Even though you tried! (Admittedly, it would have been easier if you wouldn't have had Oprah on in the back ground----but you don't really care for Oprah any more...what is going on with her?! She used to be one of your favorite people!) And now, the baby is sleeping, but not for much longer, and you've waisted time looking at Allrecipes.com and are hungry for 50 different things---none of which you have the ingredients for in your Old Mother Hubbard cupboards.......completely hypothetically speaking.....given afore mentioned scenario.....from where would you order dinner?
Posted by Brambleberry at 4:52 PM 1 comment:

4 Show me your ways, O LORD,
teach me your paths;

5 guide me in your truth and teach me,
for you are God my Savior,
and my hope is in you all day long.

Yes, Virginia. There is a Julia Child. 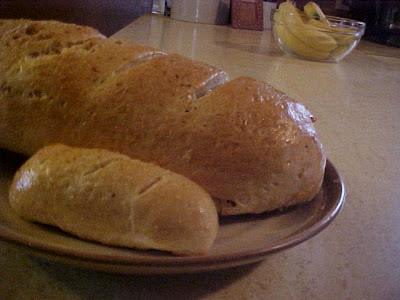 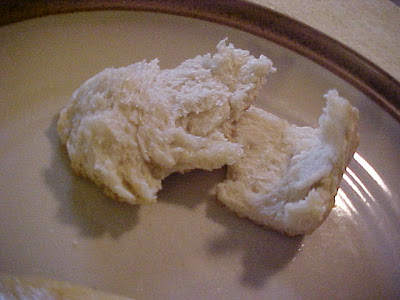 Posted by Brambleberry at 3:45 PM 2 comments:

I've been doing a lot of weeding in the last few days. After almost 5 years with a garden, things are finally taking shape. I'm loving the time spent outside. The sun. The warmth. God's creation unfolding from spring into summer. Love it.

But there's this nagging feeling I get everytime I pull the weeds from the garden in the front of my house. I am scared to death that people passing by will see me and think..... 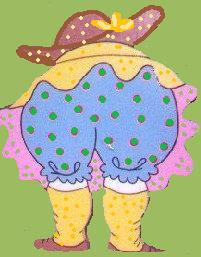 Posted by Brambleberry at 8:58 PM 2 comments: 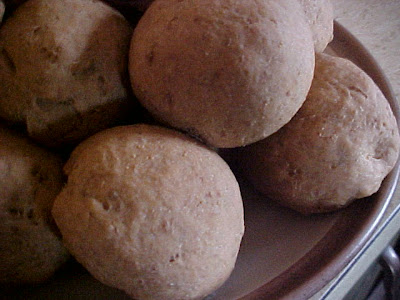 Posted by Brambleberry at 3:35 PM 2 comments:

those little ears are listening

Sunday was a nice day. I got breakfast in bed. Slept in just a little.

When my husband got out the vacuum, I showed him where the power switch was located. He gave me a look. Then we both laughed.

A little later, when I started up the breakfast dishes, he said, "You can't do the dishes today. Save them until tomorrow."

We both laughed really hard after that.

This is what my girl brought home with her today.... 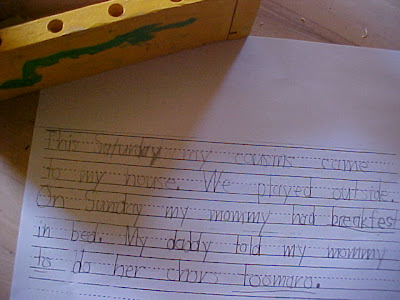 See that last line? "My daddy told my mommy to do her chores tomorrow."

The best part is that my husband has taken classes with my daughter's teacher. Hopefully she'll know this was a joke. Or he's going to have some explaining to do.
Posted by Brambleberry at 3:39 PM 3 comments:

We were waiting to pick up my girl from school with the windows down....enjoying the fresh breeze. A few 5th graders escaped early and were playing on the swings about 50 feet from my car.

Three girls started making fun of a boy for being in the "dumb" math class. They went on and on....and wrongly assumed that no one was listening.

Now, I have to say that I am so pumped that our school has implemented the Character Counts program. Their are six pillars: trustworthiness, respect, responsibility, fairness, caring and citizenship. But these pillars are only as strong as the base they rest upon. And the children need to be held accountable.

While I was listening to the belittling, I felt compelled to act. I've been trying to be more obedient to The Spirit's promptings, so I got out of my car and sat on the hood. I took a breath, prayed for the words, and walked towards the swing set. I felt angry. I wanted to give these girls some serious what-for. I wanted to march them into the office. Take names. Lock them in jail.

I got the the swings, and rested one arm on a post with the other on my hip. Six eyes got very wide and were looking straight into mine.

"Girls, I want to gently remind you about the six pillars of character. Please think about what you are saying."

"Thank you." I said, and walked back to my car.

They stopped. Who knows if it was because I was still within ear shot, or if it was because they remembered the pillars. I hope it was the latter. But just in case, I'm going to be parking in the same spot while sitting on my car for the last few weeks of school.

Beware children! Your mama might not be listening, but this mama is!
Posted by Brambleberry at 3:38 PM 9 comments: