I've been buying into the lie that things are easier if I just relax. Put my feet up. Do nothing.

I'm not sure why I fall into that mindset so easily. There are just so many good excuses I can use. They all revolve around my current condition. But I don't want to use this pregnancy as an excuse. My family still needs to eat. And wear clothes. I know they appreciate a tidy house just as much as I do.

So I'm trying. I'm baking cookies when I feel like sitting at the computer all afternoon. I'm trying to prepare dinner in the morning while I still have energy. I'm trying to get creative with lunch time so we don't need to run to McDonald's every other day.

(By the way, I watched Food Inc. last night and don't think we'll be eating out ANYWHERE from now on. Pukers.)

I'm trying not to let laziness win. I rest when I need to. But I have found that I don't need to rest all the live long day. And a rest feels better when it's been earned.
Posted by Brambleberry at 1:07 PM 3 comments:

We hit the age awhile ago with the big kids where most of the parenting we had to do was maintenance. (At least for the time being.) We laid a foundation in their early years. He was easier than she. She is too much like me. Her will is iron. She gave me the biggest run for my money.

One time I cried.

And seeing me cry broke her from her tantrum. But with that brokenness, came a glimmer of power in her eyes. I was a little worried. However, that day was a turning point. Things started to get better. I was wiser choosing my battles. Because once you chose a parenting battle, you cannot lose.

With our oldest boy, my parenting arsenal was tappedwhen he was about two and half. My punishments didn't phase him. If I took away a toy, he didn't care. He didn't like that one anyway. Once I had visions once of starting all his toys on fire in the backyard as a punishment that might catch his attention. That was when I knew I couldn't come from a place of love when handing out consequences for him. So I enlisted The Dad. Dad is my boy's currency. If I had to call dad at work, he knew that it wouldn't be all fun and games and wrestling when he walked through the door at the end of the day.

It took one phone call.

And then we coasted.

Sure, little fires would flare. But those fires were pretty easily put out. I could say things like, "I hope there will be fast listening." Or, "I would hate to have to give a consequence." And they would tow the line....for the most part.

But now. Now we have The Third Born Child. He is entering the foundation laying years. I had totally forgotten just how EXHAUSTING this phase can be.

He'll be standing on a chair, and I'll tell him to sit down.

Excuse me? Who do you think you are?! No?!? You can't tell me no. Unless I've asked you a yes or no question. And even then, it should be, "No, thank you." My big kids watch. Fascinated. Can we just tell her 'no?'

I'm trying to remember what we did with the others. He's too young for reasoning. He doesn't understand that I can call dad at work yet. So it's Game On.

It's plucking him off the chair every.single.time and saying the words, "Mommy said, 'sit down.' You need to sit down."

It's consistency. It's follow-through.

Talking and showing and teaching.

I'm hoping that Baby No. 4 will observe all of this and just kind of catch on on his own. Sort of a two for one foundation laying.

I'm ready for the coasting again.

At least until the teenage years.
Posted by Brambleberry at 12:58 PM 2 comments:

I've been dwelling on the fact that in a few short weeks, this baby will come out.

And I remember REALLY WELL what that feels like.

It feels like I want to die. But, you know, only for about 10 hours.

I'm really going to try and get him out myself this time. No pitocin. Pitocin is from the devil. And it's the only labor I know. Because, babies don't like to come out of me. They like to stay in. Until they're 9 lbs 6 oz. And eight days late.

The fog laid a heavy blanket over everything out my window this morning.

I sat, coffee in hand.

Big baby boy at my side.

Small words from the night before began to dance through my mind.

He said with such love to my littlest.

He didn't know they would be the kind of words that play back again and again.

I'm so glad I married that man.
Posted by Brambleberry at 11:08 AM 1 comment: 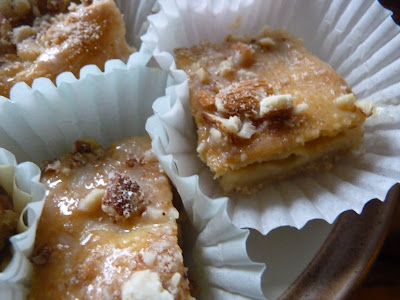 Let stand until next step is done.

In medium sauce pan, bring 1/2 c butter, 1 tsp almond extract, and 1 c flour to a boil. Beat until smooth - cool briefly - then add 3 eggs one at a time, beating well after each addition.

I cut mine and put them in cupcake liners to serve.

(I saved you some in the freezer, Dad.)
Posted by Brambleberry at 4:22 PM 3 comments:

a special kind of stupid

{post edit: if you read this before all of my grammatical corrections, you saw my case in point.}

I was doing a little sewing the other day.

My machine kept jamming up. I was getting so frustrated pulling out stitches every. single. time I tried to start this one seam. Two minutes prior, I had to "refill" my bobbin. I only had a few feet left to sew, so I quickly added a few lengths of string from the top of the machine to that bobbin, put it back in, but didn't re-thread the top thread all the way back through correctly.

It took me way too long to figure out where I had gone wrong.

The mistake was too simple.

And once I realized what I had done, I had a moment. A moment I've had four other times. The first time, I hadn't had the experience before, so I wasn't aware of what was going on. The last three times, I knew. That is, with my first pregnancy, I didn't know you get a special kind of stupid when you are pregnant. But the other three times, I knew. When simple things just don't make sense. When you lose words from your vocabulary. When you can't perform simple mathematics in your head. When you walk in a room and have absolutely no idea why.

....I had been so engrossed in my sewing, my mind was mostly empty. I realized what I had done, and for just a few seconds, that feeling of freaked out/excited/uncertainty washed over me. I wonder if I could be pregnant?

Well, Einstein, do you think?

And then I remembered. Yes! There is are very real possibility I could be pregnant.

Please tell me I'm not the Lone Idiot. What is this pregnancy phenomena. And does it only effect me?
Posted by Brambleberry at 7:44 AM 1 comment: