Had an appointment today and found out that I need to wait it out a little longer. My official ultrasound due date is today. The due date I've been counting down to is Saturday. My dad's birthday. I was really hoping to be induced on Saturday. Not going to happen. I could certainly go in on my own on Saturday...but that's not very likely.

I'm making a mental list of all the good things that can happen while I wait:

1. I can take more naps.
2. I can sleep for longer stretches at night.
3. I can leave the house at any given moment...as long as there is another adult around to watch the biggers.
4. I know what time everyone will be in bed at night.
5. I can eat sour cream.
6. I can eat onions.

As it turns out, I like to be in control.

And I am not in control.

Working on issues today....trusting The One In Control.
Posted by Brambleberry at 8:43 AM 3 comments:

This summer we couldn't seem to clear it up.

His doctor suggested trying some diet modifications...thinking a possible allergen trigger. We can always go the route of allergy testing. However, if simply tweaking his diet could save him a few hundred needle sticks, we were all for it.

First we removed all nuts from his diet. Peanuts and tree nuts. This helped a little.

Next to go? Gluten.

Followed by an elimination of High Fructose Corn Syrup.

His skin started to look better. Much better.

I began to think that nuts weren't part of the equation, until I gave him a cookie containing pecans. INSTANT flare up. So nuts are still out.

Then I wondered about the gluten. We started slowly plugging wheat back in...but only 100% whole wheat. No problems. Whew. Maybe gluten wasn't an issue? Gave him a burger on a processed bun. INSTANT flare up. So crappy bread products and all purpose flour are out.

We haven't even bothered to reintroduce HFCS, because really...who needs that garbage? Unless you like a good hit of mercury every now and again.

While this isn't the easiest diet for a little boy to follow, it's not complicated. And it's worth it. SO WORTH IT.

For breakfast, he'll eat two plain eggs (which is the way he likes them best anyhow.) Or toast with jelly. (100% whole wheat, and a preserve with actual berries and sugar.) Some mornings I'll make scones, or banana bread...I've just gotten into the habit of using only whole wheat, oat, rice, or tapioca flours - sometimes a blend of all when I bake.

For lunch at school, I send a jelly sandwich, orange slices, string cheese, a homemade cookie, and a few potato chips. (the chips ingredient list is potato, oil, salt.)

Suppertime is surprisingly easy. I've just tweaked what we normally have to fit this new diet. My meatloaf and meatballs now contain brown rice in place of bread crumbs. In place of noodles, I use corn tortillas for lasagna. Any bready stuff is just whole wheat in place of what I used to use. I make sure he's getting plenty of protein at night to make up for any absence earlier in the day.

I wish I would have started this earlier. It's been so good for him and really, it's been good for the rest of us, too.
Posted by Brambleberry at 4:53 PM 7 comments:

It only took four hours...

...but I got the kids bedrooms totally cleaned out.

(Two trash bags full of broken things whisked away while they were at school.)

And the best part? Now that everything has a place, and it all looks new and exciting, they've been holed up playing since they stepped foot in the house.
Posted by Brambleberry at 3:23 PM 4 comments:

We jumped into The Bigs.

We had no money.

And all the doe-eyed optimism to propel us into the future.

And the future was good.

Is good.
Posted by Brambleberry at 6:10 AM 2 comments:

I've been pulling off vent covers and vacuuming inside them. Using an old tooth brush to scour any dust that isn't sucked away.

It's funny how fixated I become on areas of my home that are only ever cleaned when we are about to have a baby. As I move the fridge and stove and scrub the walls and floors behind and beneath I am reminded of the last time I did this task. Two years ago. It shows. I make a mental note to do this task more often.

There are projects I would like to tackle. Things in my mind that I can't quite silence. My vehicle. It's big. It needs to be cleaned. It's too hard for me to do most of it. I can't maneuver in all of its spaces. I got stuck half way between the middle and back seats a few weeks ago. I don't intend to try that again.

The kids rooms. They're mostly picked up - with a touch of chaos. A desk FULL of projects and project making paraphernalia. Beds being held up by the toys shoved underneath.

I worry about how it will get done.

But then, this nesting thing seems to be contagious. My girl organizes her art supplies. My boy removes several toys from his collection that he wants to sell at a rummage sale next summer. My husband wakes up this morning determined to clean out the cars...and I didn't even ask....he's even cleaning the carpets. Removing seats. Washing. Waxing.

There is even talk about vacuuming the basement.

So, today, I'll be sitting with my feet up eating Butterfingers.

And trying to go into labor.

By eating Butterfingers.
Posted by Brambleberry at 12:47 PM 1 comment:

I've got a doctor's appointment this morning where I'll learn that absolutely nothing is "happening."

I know it's good to be boring in this circumstance, but just once it would be fun to have a STORY!

I was shopping for groceries and right there in front of the butter *ta da* my water broke!

I was cleaning the house when I started having contractions. They were three minutes apart! I had to call my husband AT WORK! And he had to come and we had to call a SITTER!

You know, stories that have jazz.

I was one hundred days over my due date, and the baby wasn't going to come out. So I went into the hospital on a scheduled day. They broke my water. They gave me pitocin. My baby was born 12 hours later.

Always a VERY WONDERFUL outcome, but so predictable! No drama! (*unless the other selfish hogs take up all the spots in L&D on my special day.*)

I'm wondering if they sell those special crochet hooks anywhere?

I am doing this for you.

When he hates everything in front of him at the table, I make him try anyway.

When he says he'll puke if he has to take a bite, I call his bluff.

When he says he doesn't like potatoes, I mash them up and hide them inside.

When he is "full," I make him take five more bites. (Not because I want him to be overstuffed, but because I know when he is lying.)

My dear sweet girl, for you, he will now eat (and enjoy!):

But he would prefer a jelly sandwich.
Posted by Brambleberry at 6:38 PM 4 comments:

I'm borrowing a swing from a friend. Only, she doesn't need it back when I'm done with it. It will find its way into another home when this new babe grows out of it.

The swing we had with our first rocked many many more babies than my own. And an entirely different swing rocked my third.

This new-to-us swing had a navy blue plaid cover. It wasn't ugly. But it didn't match my mood. And I was on a sewing roll the day I covered my bouncy seat, so I threw together this: 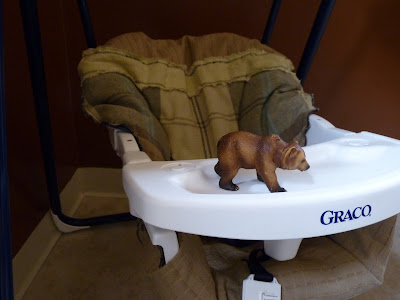 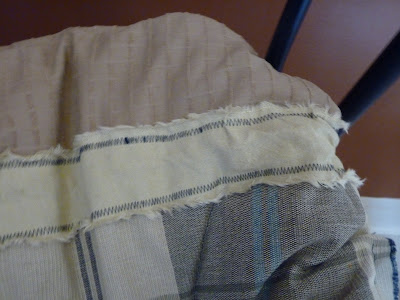 It had to have some navy in it, since the frame is still navy. I thought about spray painting it...but since it isn't mine, I didn't want to make any irreversible changes. The cover can be removed, and it can be changed back to its original state.
Posted by Brambleberry at 12:30 PM 5 comments:

I had an old bouncy seat that lived through my two other boys. It looked boyish. Plus six-years-ago-ish. With a hefty dose of ugly. So I covered it: 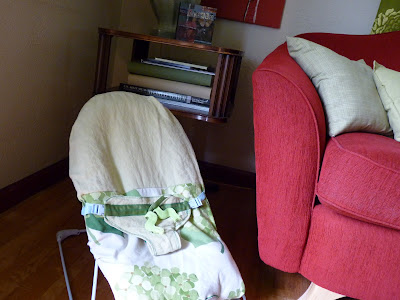 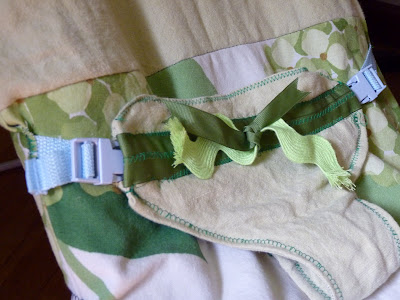 It still has light blue buckles and frame...but one can no longer make out the random zoo animal print beneath. And now it matches my furniture.

Am I happy with the results? Meh. It's better than it used to be. I'm okay with that.

Posted by Brambleberry at 7:00 AM 5 comments: 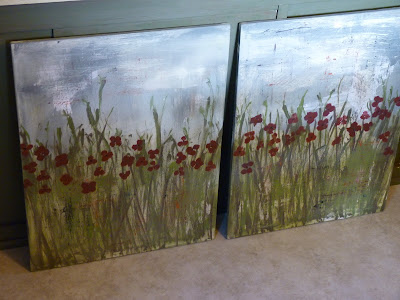 Posted by Brambleberry at 7:00 AM 3 comments: 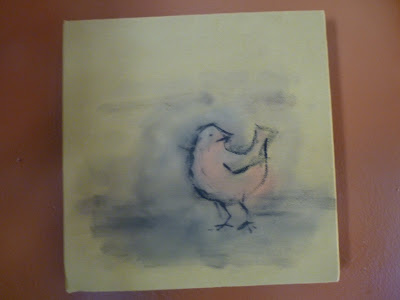 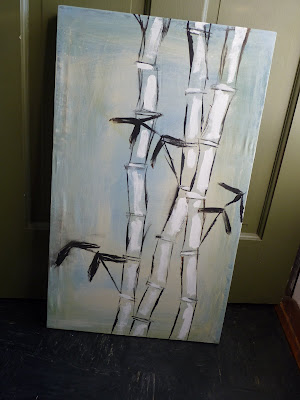 Posted by Brambleberry at 7:00 AM No comments: 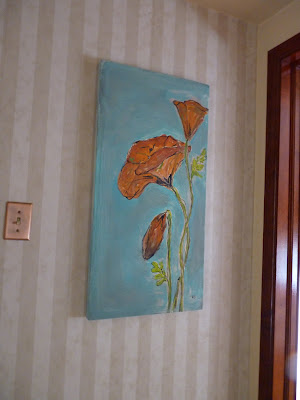 Posted by Brambleberry at 7:00 AM 2 comments: 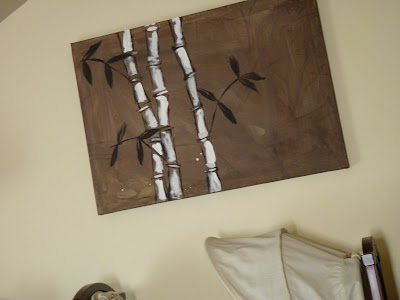 Posted by Brambleberry at 7:02 AM 3 comments: 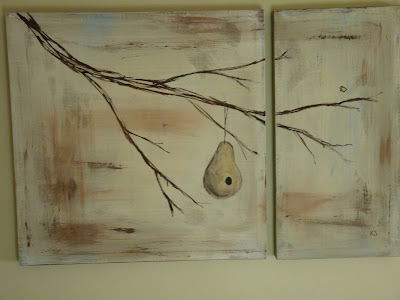 A few weeks ago, my husband ripped off two of my appendages and brought them to visit their Grandma and Grandpa. My youngest and I stayed home.

Before they left, The Man made me several frames for paintings. (He makes the frames, I stretch the "canvas.") This was a big priority for him. Because he has known me for many moons. And he knows that me + too much time on my hands = hasty home remodel projects done with staple/glue guns.

He knew I intended on painting our bedroom. But I was given STRICT instructions upon their departure. He did not want to come home to any surprises. Every party has a pooper and that's why I invite him.

My big baby and I spent a lot of quality time together while the rest of our crew was gone. But he's a good napper. And I found myself with plenty of free time. So I painted. And painted. And painted. I'll share a painting a day for the next couple of days.
Posted by Brambleberry at 10:20 AM 5 comments: